It has been reported that Prince William recently paid an astonishing £180 for a number 1 haircut, that is 968% more than the UK average. Research by money saving voucher code website NetVoucherCodes.co.uk, shows that if Prince William had been savvier he could have saved himself a fortune! 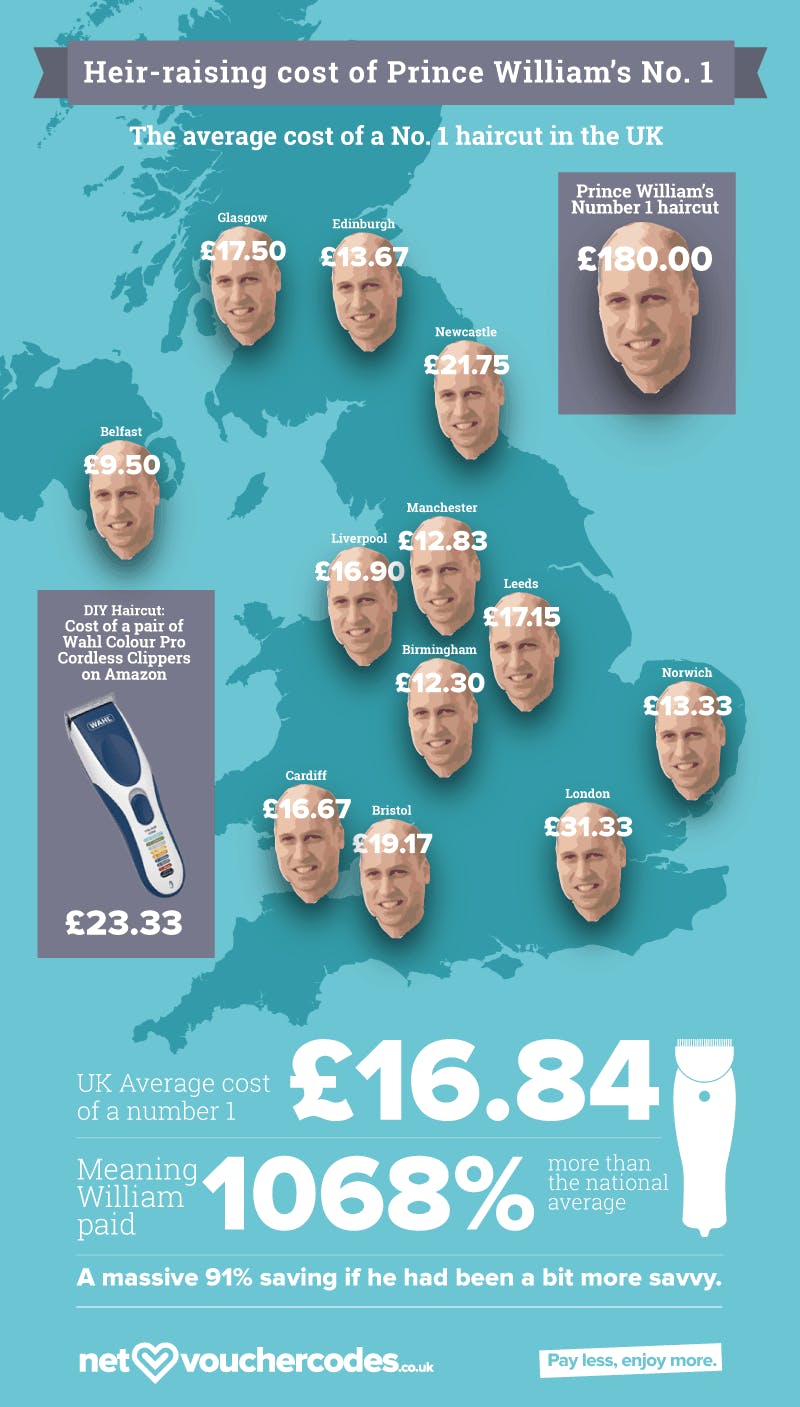 The research of barbers across the UK shows that although London is the priciest place to get a number 1, Prince William could still have had the same haircut for as little as £17 in some parts of London saving him £163.

The cheapest city in the UK for Prince William to have got his number 1 would have been Belfast with the cheapest price just £8.50 for the same haircut. That represents a huge saving of £171.50!

A spokesperson for NetVoucherCodes.co.uk said: “Everyone wants to look their best, especially if they are in the public eye, but a number 1 haircut is a number 1 haircut no matter which barbers do it and to pay £180 is simply extortionate.

“With many people struggling financially in the UK and maybe not able to afford to have their haircut as often as they’d like, news of Prince William’s £180 number 1 is likely to upset some people.

“The problem with having a number 1 haircut is that hair grows back quickly, so how often will these £180 haircuts take place? Maybe a wise investment would be to buy his own set of clippers for around £25 and save a fortune over the year by asking Kate to give him a trim!”

Follow our social channels for daily tips on reducing the cost of living & save money across all areas of your life!

Be the first to know,

Receive the best vouchers in our email

Drowning in energy bills? We’re sharing our top bathroom energy saving tips to help keep costs low. We’re all trying to be more energy conscious around our home, but have you ever thought about how much energy your bathroom alone is consuming?  While we can all switch off our TVs or take a break from […]

Going green isn’t just good for the planet, it can also be good for your wallet! We’re sharing our top money saving sustainable switches to be eco friendly on a budget. Living a more sustainable life doesn’t have to cost the earth. In fact, making small changes can actually save you in the long run, […]

Did you know your favourite electronics and appliances could be eating away at your energy bill every month? We’re naming the top culprits and simple ways you can put a stop to it. With the rising cost of energy bills, now more than ever UK households are looking for ways they can reduce their monthly […]

Spending too much money on your TV Subscriptions? Cut back the costs without missing out on your favourite shows & movies. If you’re a keen binge-watcher or movie buff, you’re probably all too familiar with popular streaming giants like Netflix, Disney+ or Prime Video. With the rising cost of living, energy bills soaring and fuel […]

Dine-In for less with our Guide to Eating in on a budget. You can’t beat having your favourite grub delivered straight to your door without having to move a muscle. And If you’re no stranger to a takeaway, you’ll know that Just Eat, Deliveroo and Uber Eats are the three takeout giants many of us […]

Looking to re-furnish your garden but don’t know where to start? Our ultimate guide to garden furniture is here to help you find the right pieces for your outdoor space. We’ve laid out the pros and cons for every type of garden furniture with material, size and style breakdowns included. We’ve even featured expert top […]

The Easter Holidays have landed for many adults & parents across the UK which means you’re probably twiddling your thumbs with how to keep the kids occupied. We thought it would be a cracking idea to list some popular days out for you and your family to help ensure your Easter break is Sunny Side […]

Spring has officially sprung and the lighter, brighter evenings have ensued! And in true British fashion, we’re all racing to prep our gardens in time for some al fresco fun. If your garden has felt the brunt of the winter, we’re sharing ways you can freshen up your outdoor space without spending a fortune this […]

The kitchen is a hub for energy usage, and with our bills on the up, we’re looking at ways you can be more energy efficient when it comes to cooking and keeping your bills low. You’ve probably never realised it, but being more mindful of the way you cook could significantly reduce the amount of […]

With longer days and better weather on route, the time has come to blow the cobwebs off the shelves and treat our home to a Spring Clean. But before you run off to the closest bargain store to stock up on anti-bacs and bleach – did you know that you probably have all you need […]