The following GAME codes have now expired. We list them here for comparison purposes, to show what levels of vouchers have been available in the past vs current code discount levels.

Where do I use my GAME voucher code?

"Trade in your old games for cash or trade in credit and get money off when you buy games."

"Sign up for the GAME rewards app and earn points whenever you buy or trade-in."

"Check out the GAME black friday sale which runs every November."

GAME is a leading retailer of games consoles and video and computer games of all types. Shop here for all models of PlayStation, Xbox and Nintendo Switch consoles and Switch games. You’ll also find all manner of game accessories like cables and chargers, headphones, controllers, gaming chairs and virtual reality headsets. In addition to exciting new releases, you will also find a good selection of pre-owned consoles, games and accessories, which is great if you are shopping on a budget. They also offer a range of technology products such as phones and tablets, laptops, drones and more and a selection of games related merchandise.

Consoles and Games at GAME

GAME offers every type of console and game available including PS Vita, PS3, PS4, PS4Pro, Xbox360, Xbox One, Xbox One S, Xbox One X, Nintendo Switch, Wii and Wii U. They also offer a range of pre-owned games and consoles saving you lots of money but still giving you the same levels of fun and excitement. It is possible to pre-order new releases and they also stock a good range of retro games.

Xbox One at GAME

Game has all the Xbox consoles on offer including the Xbox One S and the new Xbox One X. On the Xbox one you can still play Xbox 360 classics, as well as the new blockbusters such as Gears of War 5 & FIFA 20 and play with friends on Xbox Live, which is the most advanced multiplayer network. You can suspend and resume your game whenever you want to. You can also stream video and watch Blu-ray™ films. Dame also offers Xbox One bundles which include the console together with a selection of compatible games and represent great value.

At GAME, you will find all models of PlayStation including the PS4 and PS4 pro - including some fantastic value PS4 bundles and games including God of War, Call of Duty modern warfare, FIFA 20 and more. The world's best-selling console is now slimmer and lighter. You can experience exciting adventures and battle with best players online and challenge your friends in your home with a PSN membership. All of the games are completely cross-compatible with ps4 and ps4 pro, and players compete online in the same multiplayer ecosystem. You will find that the visuals are much more realistic with this console. You can also save on your PlayStation plus membership with a range of pre-paid cards you can redeem on PSN.

Disclosure: Any offer labled as "Deal, "Sale", or "Code" means that it is an affiliated link and helps us stay free to use. If you click through it, it can sometimes result in us earning a commission. 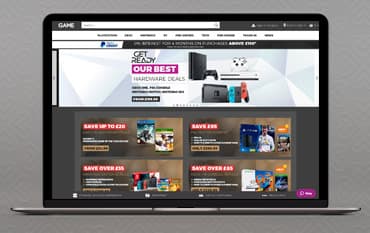 GAME is the UK’s leading retailer of all kinds of computer and video games, with great deals on consoles, pre-owned items, gifts, gadgets and PC downloads too. GAME offers free UK delivery and reward points on all of the above, plus accessories and special pre-order deals on upcoming titles. As well as all the latest new releases, you can pick up popular classics and overlooked gems on all the big Games Consoles. They’re also keen to help you find the hardware to enjoy your games - whether it’s a PC, a console or a tablet - and savvy shoppers can save a bundle on quality titles by shopping through the Pre-Owned and Trade Ins categories. What’s more, you can find out about the latest special events in your local store and sign up for their newsletter to get notifications on the newest bargains - and using our GAME voucher codes you’ll be getting the best prices possible!

Get Social with GAME

Be the first to know, receive the best vouchers in our email

Reasons to shop at GAME