The following Madame Tussauds codes have now expired. We list them here for comparison purposes, to show what levels of vouchers have been available in the past vs current code discount levels.

“Book online today to take advantage of savings as high as 20% off your purchase!”

“Savings as great as 40% off when you book in advance for educational institution bookings!”

“Multi-booking discounts available on all purchases, when you book 1 or more additional Merlin groups attractions!”

Very few companies exist with a heritage as rich as that of Madame Tussaud’s, the story of a French housekeeper’s young daughter - displaying a flair for the craft of waxworking. She was soon enough made an apprentice, turned artist; so proficient in her talent, Tussaud’s former tutor later entrusted her with his entire waxwork collection and a legacy was born. Quickly ascending to fame in her career, she sculpted waxworks of the rich and famous - her first works entailed huge figures such as Benjamin Franklin, Voltaire and Jean-Jacques Rousseau. Perceived as a royal sympathiser during the advent of the French revolution, she was apprehended and in line for the guillotine; with a stroke of luck she was released alongside her tutor, who had ties with an ally on the other side of the revolution. Later in her life she toured around the British Isles with her sculpture collection, eventually establishing her first exhibition in London on Baker Street.

In the present day, Madame Tussauds proves to be one of the most famous tourist attractions in London and all over the world - with branches that can be found in every corner of the globe. An astounding range of waxwork models can be found in Madame Tussauds: members of the British royal family, favourites from the Star Wars universe and all of the A-lister celebrity giants, plus many more! Madame Tussauds is part of the Merlin group, offering a multi-booking discount when you book in conjunction with one of their many other attractions across the country.

Marie Tussaud was arrested during the Reign of Terror period of the French Revolution, she was in line for the guillotine and even had her head shaved in preparation of the execution; she was fortunately saved by a revolutionary who happened to be a friend of her tutor.

If you fancy booking a trip down to Madame Tussauds anytime soon, ensure you complete your booking online as this is where the greatest discounts available are on offer. Standard adult tickets retail from £29 online, in comparison to their walk-in price of £35! As always the Merlin group offer their customers a generous multi-booking discount, including other attractions such as the Coca-Cola London Eye, The London Dungeons and SEA LIFE London. Discounts are also available online for Madame Tussauds non-standard tickets; fast track tickets and family tickets are both cheaper when you book online, with 10% and 20% discounts respectively on offer.

Madame Tussauds in both the Blackpool and London branches are offering pupils and their schools a truly unique learning experience. Learning outcomes have been set up to align with the current school curriculum, lesson plans and workshops have been designed to give pupils a well-rounded understanding of the study topics on offer. Topics ranging from space and the wonders of the universe, English studies on the purpose of media and the use of language to create meaning, in addition to PSHE and Citizenship. Discounted rates on student tickets are available for all schools.

What time is Madame Tussauds open?

Each branch operates under different opening times relative to where they operate, seek out your local branch on the Madame Tussaud website.

How much do tickets cost?

Disclosure: Any offer labled as "Deal, "Sale", or "Code" means that it is an affiliated link and helps us stay free to use. If you click through it, it can sometimes result in us earning a commission. 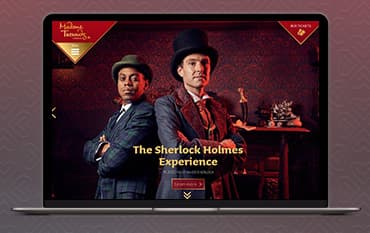 Take a trip to the world famous Madame Tussauds! Visit the home of the original waxwork museum based in London, or make your way up to Blackpool for the northern-based branch within the UK. Renowned for its extensive range of wax-made doppelgangers based on characters both real and fictional. Madame Tussauds makes for the perfect day out for your family and friends, with a plethora of exhibits suitable for all ages - there’s truly something for everybody; get up close and personal with some of the biggest names on the planet, both alive and deceased. Displays inside feature your favourite stars from television, sports, music and broader pop culture.  Two branches are conveniently situated in the north and the south of the country, don’t hesitate and book your trip online today. Remember to always use a voucher code from us to ensure you maximise your savings on your booking.

Get Social with Madame Tussauds

Be the first to know, receive the best vouchers in our email

Reasons to shop at Madame Tussauds